This blog post provides details about two vulnerabilities found by Quarkslab's researchers Guillaume Delugré and Kévin Szkudłapski in the secure boot feature of the i.MX family of application processors [1] built by NXP Semiconductors.

The bugs allow an attacker to subvert the secure boot process to bypass code signature verification and load and execute arbitrary code on i.MX application processors that have the High Assurance Boot feature enabled. These bugs affect 12 i.MX processor families.

The vulnerabilities were discovered and reported to the vendor in September 2016 and the technical details included in this blogpost were disclosed in a joint Quarkslab-NXP presentation at the Qualcomm Mobile Security Summit 2017 [2] in May 19th, 2017. National computer emergency response teams (CERTs) from 4 countries were informed about the issues in March, 2017.

NXP has issued an Engineering Bulletin and two Errata documents (EB00854, ERR010872 and ERR0108873 respectively) [3] providing a brief description of both vulnerabilities, the list of affected processor models along with resolution plans and possible mitigations.

In the rest of the blogpost we describe the relevant features in i.MX processors and the vulnerabilities affecting them.

The i.MX family of devices built by NXP Semiconductors are ARM-based application processors present in System-on-a-Chip (SoC) systems used in the automotive, industrial and consumer electronics markets. The microcontrollers, originally developed by Freescale Semiconductor which was acquired by NXP in 2015, provide a rich set of security oriented features such as secure and encrypted boot, tamper detection, hardware acceleration for various cryptographic algorithms, on and off chip secure storage, secure real-time clock and a hardware-based random number generator.

These features have to be enabled by vendors that use i.MX processors in their products and in some cases the processors are configured in a locked state in which the security features cannot be disabled.

There are several development boards that interested readers may use to experiment with the security features of i.MX processors. The vulnerabilities described here were discovered using a SabreLite [4] i.MX6-based development board like this: 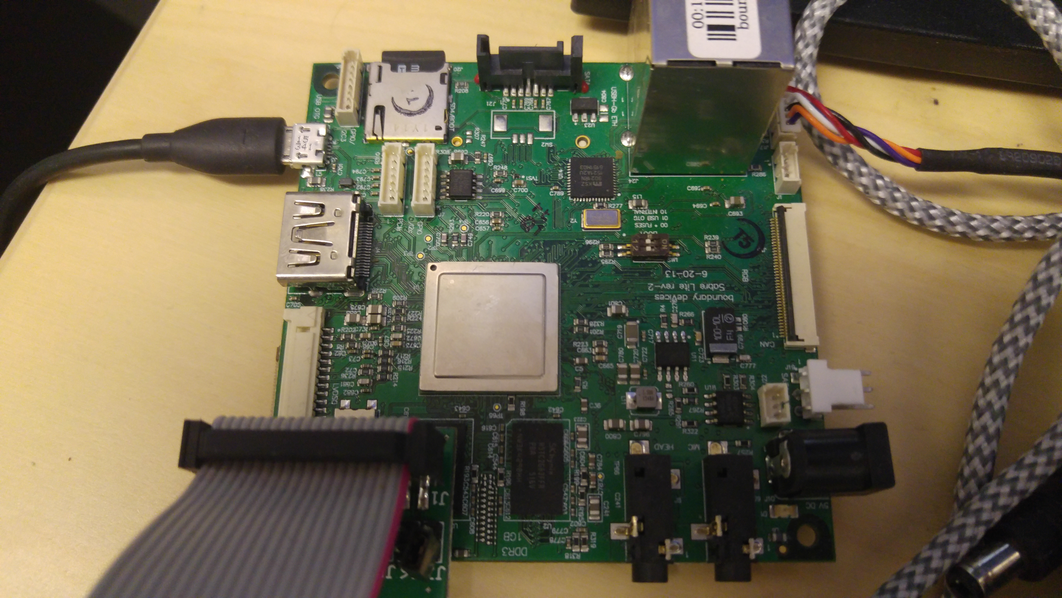 What is secure boot?

Secure boot is the process by which a system turned off is brought up to a known good state when it is turned on. The process generally involves the chained execution of native code packaged in multiple binary files that are loaded, verified to be authentic and not tampered with, and executed in a sequence that ends with the system ready to run as intended by the manufacturer or user. This is generally accomplished by using digitally signed binaries that upon execution check the integrity and authenticity of the next binary to be loaded and run, and transfers control to it if the verification did not fail.

Systems that have a secure boot feature enabled and locked in a way that can not be disabled prevent tampering by end users, downstream vendors, integrators or attackers with physical access to the device. The feature is generally used to enforce digital rights management (DRM) and intellectual property protection requirements or to prevent execution of malicious or otherwise unauthorized software on the device.

High Assurance Boot (HAB) is NXP's implementation of secure boot in i.MX processors. This is a capability built into on-chip ROM responsible for loading the initial program image, usually the first stage bootloader, from the boot medium.

HAB uses public key cryptography, specifically RSA keys, to authenticate the image executed at boot time. Image data is signed offline by the image provider using private keys and the i.MX processor verifies the signature using the corresponding public keys, which are loaded from a section of the binary to be verified.

The root of the trust chain is anchored on a set of RSA key pairs called Super Root Keys (SRKs) used to prevent loading and use of arbitrary public keys provided by potential attackers trying to run image data signed by themselves with the corresponding private keys. It also optimizes the use of scarce one-time-programmable hardware resources. The private keys are held by the Certification Authority issuing keys used to sign image data and a table of cryptographic hashes of the corresponding public keys is stored in one-time programmable hardware. In the case of an i.MX processor that supports secure boot, this is a masked ROM and electrically programmable fuses (eFuses).

Upon booting HAB bootrom loads the SRK table from the image's Command Sequence File (CSF) section, calculates the hash value and compares it to the value stored in the SRK fuses. If the value matches, the secure boot process continues by verifying that the image is properly signed with the proper key. A failure or error in the boot process may make the processor enter recovery mode, in which a boot image can be securely loaded from a UART or USB port using the Serial Download Protocol (SDP) described later on.

The public keys are provisioned in X.509 certificates using a Code Signing Tool (CST) provided by the vendor. The HAB functionality is exposed to boot image code through an API than can be called by commands in the Command Sequence File. The CSF contains all the commands that HAB executes during the secure boot, the SRK table and the certificates and signatures to validate the image to be loaded and run. 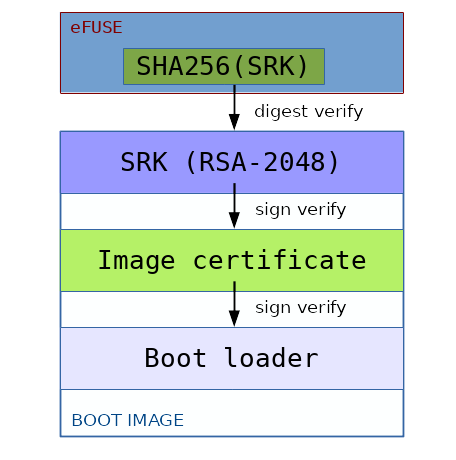 The bootrom supports a recovery mode called SDP (Serial Download Protocol) which enables the loading of a boot image from a USB or UART port.

To achieve this, the bootrom implements a small USB protocol over HID with some simple commands:

When the device has been locked in secure mode, multiple checks are done to protect the bootrom against unallowed memory accesses and unsigned code execution:

The vulnerabilities were discovered by analyzing a compiled bootrom image.

The names used to identify functions in the code have been assigned arbitrarily based on understanding the code's functionality and do not reflect the real function names used in the original source code.

The addresses used to describe location of functions are related to a bootrom image with the following MD5 digest: 945cfc9f525a378102dd24b5eb1b41cf.

Each vulnerability described in this document has been successfully confirmed using a functional exploit bypassing the HAB secure boot on a locked Sabrelite development board.

InversePath, vendor of USB Armory [6], an affected device confirmed the vulnerabilities and developed proof of concept programs to demonstrate them.

The X.509 certificate parser of the bootrom is vulnerable to a stack-based buffer overflow that can be exploited by loading a crafted certificate.

The control flow of the secure boot follows these steps:

Key installation is done using the INSTALL_KEY CSF command. The different keys are loaded and verified, each of them being verified by a previously installed key (the root of trust being the SRK fuses).

When installing a public key of type X.509, the function hab_csf_cmd_install_key (at address 0xB5C0) will locate the plugin responsible for importing X.509 certificates and call in a row:

Hence, the entire certificate is parsed before having its signature verified. As the INSTALL_KEY command can be executed before any authenticated command, a vulnerability in the X.509 parser could be triggered by an attacker with no pre-requisite other than being able to tamper with the boot image or switch the device into recovery mode.

The HAB bootrom uses its own ASN.1 and X.509 parsing library and a vulnerability exists due to an incorrect call to an ASN.1 library function when parsing X.509 certificate extensions.

The function asn1_extract_bit_string (at address 0xE796) can be used to copy the contents of a bit string object using the internal function asn1_deep_copy_element_data (at 0xEF20).

This method is called recursively to copy the contents of an ASN.1 object into an output buffer passed as an argument. One peculiar characteristic of this function is that it doesn't have an input argument that holds the value of the output buffer. Instead, the required size is returned to the caller when a NULL pointer is passed as the output buffer, a behavior quite similar to the Windows API.

The asn1_extract_bit_string function should be used by first callinf in with a NULL argument, allocating the required memory with malloc and calling the function again with the newly allocated buffer.

The X.509 specification describes the keyUsage extension as begin a bit string object, composed of the following 9 bits:

When the certificate extensions are parsed, if a field keyUsage is present, the function asn1_extract_bit_string is directly called by specifying a pointer to a 32-bits integer on the stack as the output buffer.

A bit string object with a size greater than 4 bytes in a keyUsage extension will then trigger a stack buffer overflow.

When the function asn1_extract_bit_string returns, the bootrom code verifies that the returned size is not greater than 4 bytes, but the copy operation has already been done. The calling function then returns and pops its return address off the stack, which allows an attacker to redirect the PC register and execute arbitrary code. 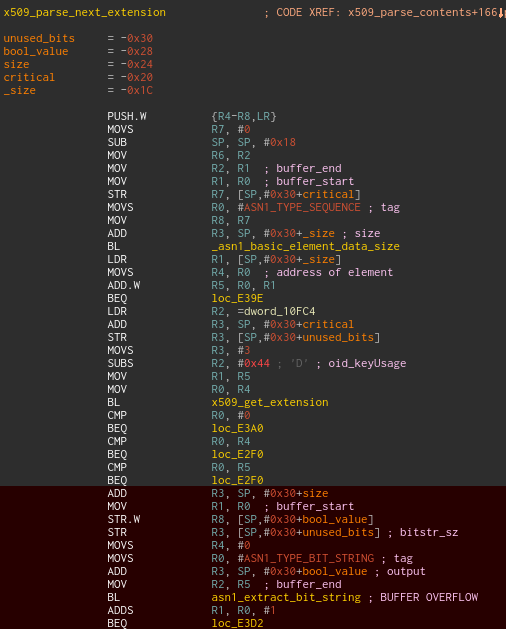 Memory checks present in the WRITE FILE command handler are incorrect and enable an attacker to achieve arbitrary code execution.

During the handling of commands DCD WRITE and WRITE FILE in trusted mode the memory range comprised of address and address + data_count is checked by the hab_check_target method (at address 0x753C).

Depending on the kind of memory accessed, the memory range is checked against a whitelist of safe memory ranges.

This bug is possibly caused by a confusion with the READ/WRITE REGISTER commands that use the format field expressed in bits.

This bug leads to a buffer overflow when the data is sent by the host over USB.

The memory size passed into R2 is expressed in bits instead of bytes.