The OCI Image Specification is the core concept behind container images. However, not much is known about it even though container technologies are becoming more and more popular. In this blogpost we will demystify it and look into its internals.

The Open Container Initiative (OCI) gave birth to the way we create containers today. It defined two specifications - the runtime-spec and the image-spec. In the previous article of the container series, we analyzed runc - an implementation of the OCI runtime-spec. In this article, we are going to study in detail the OCI image-spec. It defines how a runtime specification (hence a container) can be moved from one host to another. Furthermore, the specification provides means for OS resources to be efficiently shared between different container processes. The image-spec is implemented by Containerd and Docker which are considered as more "high-level" runtimes than runc. Let's dig into it!

Limitations of the Runtime Specification (runtime-spec)

The runtime specification defines the following two necessary elements to launch a container:

With runc it is possible to checkpoint a running container process and start it later in the same process state (memory pages, file descriptors, etc) thanks to CRIU. Sadly, runc doesn't provide a similar functionality regarding the process' root file system. This could be extremely useful for live migration or a simple backup of the container's current state. Another big limitation of runc is that for each independent container process we need a separate runtime-spec bundle (configuration + root directory) if we want to preserve the isolation between different containers. This can quickly lead to bad resource usage, especially if several container processes use the same configuration and/or don't modify the predefined layout. If we want to modify a runtime bundle and then move it from one container host to another, the procedure gets even more complicated. Hopefully, the image specification resolves these challenges. With the definition of this specification, two types of runtimes can be distinguished: "low-level", which does not implement it, and "high-level", which does implement it on top of other cool features (which we will discuss in other articles).

This specification defines an OCI Image, consisting of a manifest, an image index (optional), a set of filesystem layers, and a configuration. The goal of this specification is to enable the creation of interoperable tools for building, transporting, and preparing a container image to run. 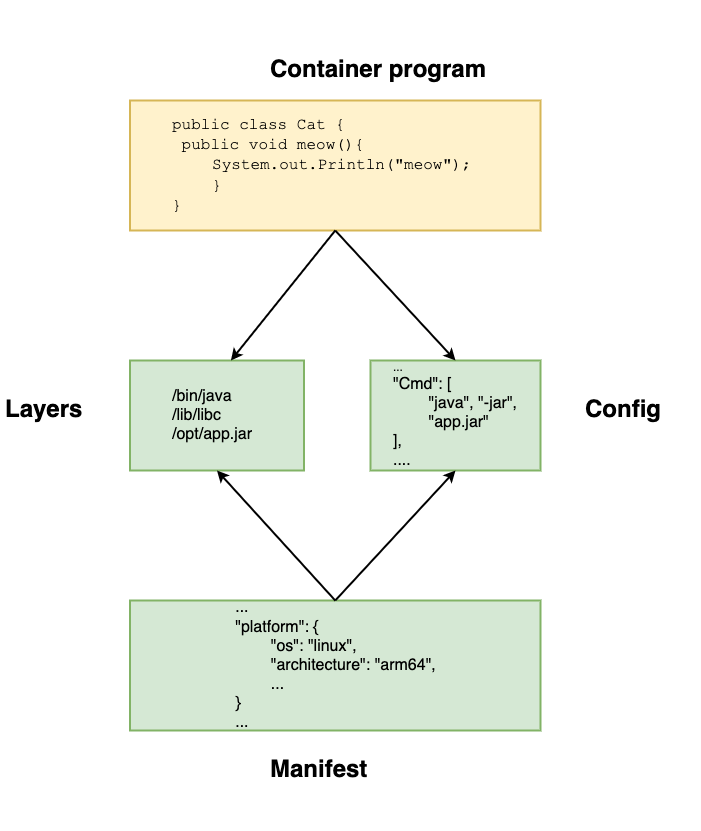 Above we can see a graphical representation of how a Java application can be packed into an OCI image following the above definition. All the necessary system libraries and dependencies of the application are referenced as layers. The properties, associated with the Linux process executing the program, are defined in a file called config. The third element, called image manifest, specifies the CPU architecture for which the previous two elements are suitable.

If we look closely we can see a relation between these components and the ones defined in the runtime specification. To some extent, these specification elements are sufficient to define a runtime-spec for a particular host.

Formally, the image-spec defines a couple of more elements:

Note that in the next sections by content descriptors we'll refer to the hash of the content.

Let's now demystify the purpose of all these specification components. 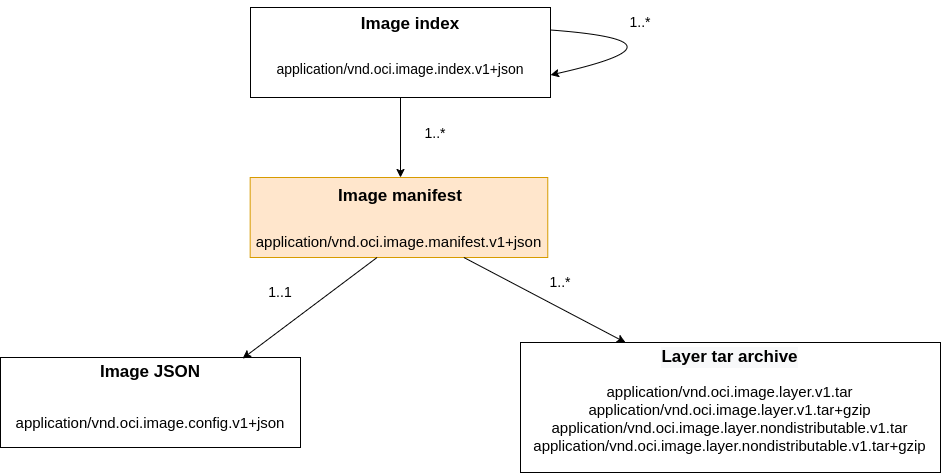 Manifest element of the OCI image-spec

The Image Manifest describes the necessary elements to create a container on a given host with a given CPU architecture. In other words, it defines the runtime bundle. Furthermore, following the documentation, the specification element also aims to achieve the following:

The implementational scheme of the image manifest has a JSON-like structure containing the following:

To illustrate the image manifest we are going to use the Containerd's CLI tool - ctr and inspect the contents of an Alpine Linux image downloaded from the Dockerhub.

Using the pull command we can see that the following image elements were downloaded:

Each of them comes compressed and with a sha256 hash calculated on its compressed contents. Ctr also automatically decompresses and extracts the downloaded contents into directories saved in the Containerd's image store. The latter can be found under /var/lib/containerd/io.containerd.content.v1.content/blobs/sha256/. The descriptor of the image manifest is sha256:a777.... Let's inspect its content.

We retrieve the file descriptors of the file system layers and the configuration file.

In addition, the hash values of the contents can be obtained by doing the following: 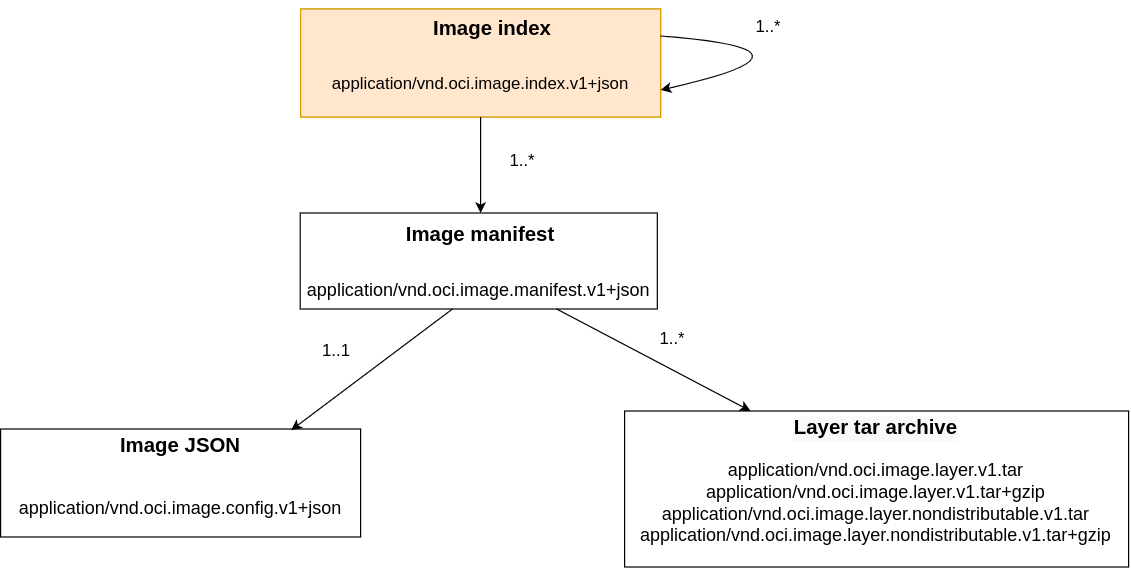 Index element of the OCI image-spec

The Image Index is a higher-level manifest containing file descriptors to architecture-specific image manifests (eg: amd64, arm, x86, etc.). It can be thought of as a Merkle tree that contains different versions of the same image. This element of the specification is again represented using a JSON-like structure and contains the following:

To illustrate the Image Index we'll use ctr and the same Alpine Linux image downloaded in the previous chapter. Its index is annotated with sha256:4edbd.. tag (see the content downloading snippet above).

With the help of the Image Index, a container manager such as Docker or Containerd could retrieve the contents of a given container image for the host's current CPU architecture and derive a container bundle from them. The following results/experiments in this article were obtained/conducted using the amd64 architecture manifest (here identified with sha256:a777...). Of course, "high-level" container managers are smart and will only download the image manifest which is suitable for the current CPU architecture:

To download all the manifests with ctr we have to specify the --all-platforms flag.

The Image Layout is a file system directory layout where the contents of a container image are extracted. It contains all the elements of the image-spec represented as file system objects (or just files and directories). The directory structure format is the following:

Let's inspect all that using the ctr's export functionality and the same Alpine Linux container image.

Note that to be able to use this feature one has to download all manifests contained in the Image Index.

From above, we can see the described directory layout. There is one element more than in the original specification - the manifest.json. It is a direct reference to the contents of the appropriate Image Manifest:

We can confirm that by retrieving the contents following the Image Index and then the Image Manifest.

Indeed, the manifest.json file is a shortcut to the contents of the suitable manifest. 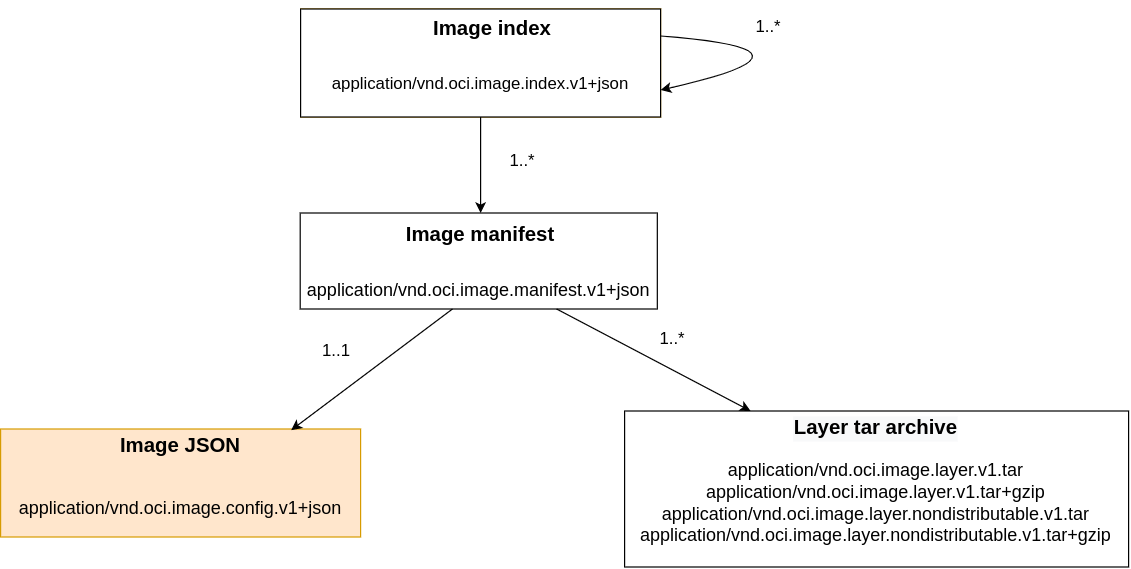 Configuration element of the OCI image-spec

Let's now inspect the configuration of our favorite Alpine image identified by sha256:0ac33e5... (see above).

From the above snippet, we can retrieve a lot of similar elements to the runtime-spec configuration alongside the previously mentioned other cool features. It is important to note the difference between the descriptors used for navigation in the image layout directory (the sha256 blobs) and the DiffID's (diff_ids) present in the configuration file. The former could be calculated on compressed or decompressed content while the DiffID's are calculated only on decompressed content.

We can see that the sha256 tags from the configuration file (sha256:4fc...) and the directory in the image layout (sha256:df9...) are different. But now if we decompress the contents and compute their hash we will resolve this small mystery:

This conversion is done by the container engine which will also include the isolation mechanisms concerning the current host configuration. However, there are more detailed rules so again please refer to the documentation for more details.

Throughout the whole article, we used content descriptors to reference the elements of the image-spec. Let's see a more formal definition: 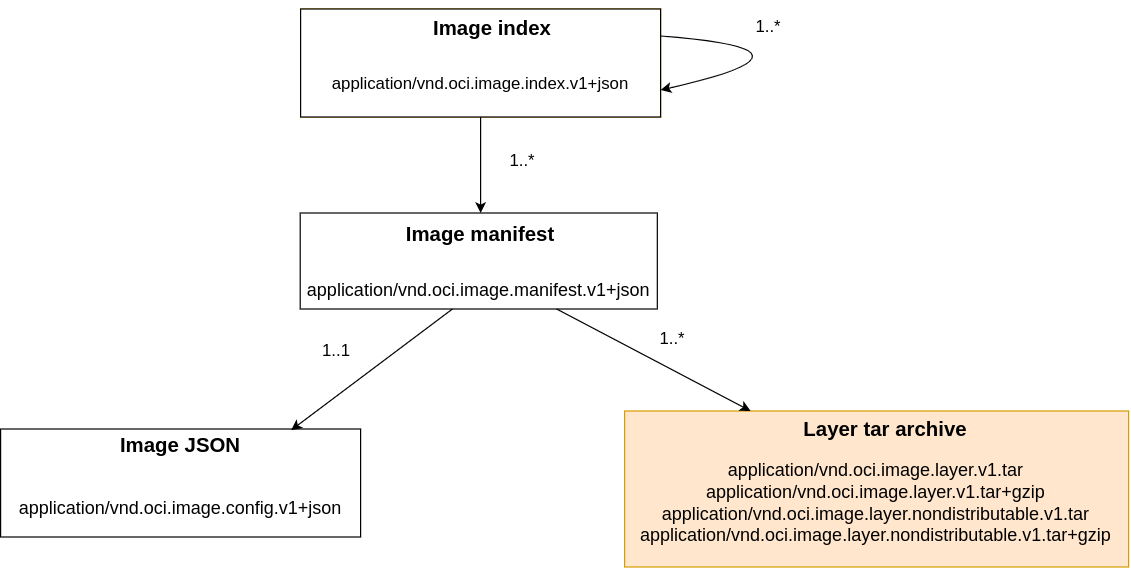 We saw that an Image Manifest contains references to different file system states which are referred to as layers. Each layer contains a modification (insertion, deletion, addition) of the file system relative to the previous one. When all of this file system "history" is combined in the right order a root directory layout for a container is created. This part of the specification defines the types of file system modifications and how they can be assembled to form a container root file directory. Let's consider the following modification types:

Here we will demonstrate, using a toy example, how the magic happens. Let's consider an initial filesystem root having the following structure:

and the following changes:

To convert this sequence of actions to a set of image layers one has to do the following:

When constructing the final root directory, the layers (also called changesets) are applied in top-down order (first-in-first-out). These layers are often compressed as seen in the previous examples to optimize transportation costs. Because of the number of snapshots, it is recommended to use a copy-on-write or union filesystems (Overlay or AUFS) when building images.

Let's see a more practical example of how all this works using a good old Dockerfile. The Docker technology has integrated an image-building feature that allows the transformation of a container root directory to an image. For more details on how this is done, please read the documentation.

To analyze it using again the ctr tool (let's be consistent even though this can be done using Docker), we need to push this custom image to a private image registry so that we can download it afterward:

We can see that the number of layers corresponds to the number of lines starting with a Docker specific command (RUN, FROM). Now you probably understand why people try to write Dockerfiles as compactly as possible ;). Let's dig into the configuration and inspect the different layers:

Okay, we can see the history log of the actions in the Dockerfile. Let's now inspect how are they represented on the file system level:

We can see that our toy example was not so far from the truth after all.

Note that a file with .wh (without file) prefix indicates that this is a file to be deleted when the layer is joined.

The OCI image-spec extends the runtime-spec allowing portability of container applications between different hosts. In combination with other cool technologies such as OverlayFS/COW (Copy-on-write), resources between containers running on the same host can be efficiently shared. Modern container runtimes such as Containerd and Docker implement the OCI image specification, hence they deliver some nice features facilitating container management.

I would like to thank Frédéric Raynal (pappy), Mahé Tardy (mahé), Damiano Melotti (dmell) and Sébastien Rolland (Sébastien), members of Quarkslab, for their insightful comments, encouragement and intellectual guidance.