This micro blog post introduces our research regarding symbolic deobfuscation of virtualized hash functions in collaboration with the CEA and VERIMAG.

Since 2016 we have been playing around symbolic execution and binary deobfuscation in order to (1) test and improve our binary protector (Epona) (2) improve our DSE (Dynamic Symbolic Execution) framework (Triton). Last week we published at DIMVA 2018 a part of this research focusing on attacking virtualization based-software protections and specially when hash functions are virtualized in order to protect integrity checks, identifications etc. For this study we relied on an open-use source protector (Tigress) and provided scripts and results of our attack as well as some solutions of the Tigress challenge.

Everything is explained in detail in the paper but we will summarize the key points and results of our approach in this micro blog post.

To evaluate our approach we made two kinds of experiments, the first one on a controlled setup and the second one on an uncontrolled setup which is the Tigress challenge. Then we defined three criteria:

In the controlled setup we picked up 20 hash algorithms and 46 different Tigress protections (all related to virtualization, like different kinds of dispatchers, operands...) and then we compiled each one of these hash algorithms with the different protections, so which gave us a dataset of 920 protected samples. The goal was to devirtualize these samples using our approach (script here) and compare results (according to previous criteria) with original versions. Results are that we are semantically correct for all samples with a size close to the original one, and even, smaller than original one in some cases (see following tables (b)).

Regarding the efficiency of our approach, we have a linear time of analysis according the number of executed instructions. We successfully devirtualized a major part of our samples in less than 5 seconds (see following figures). Worst samples took more than 100 seconds which are basically samples containing two levels of virtualization and involved about 50 millions of instructions. 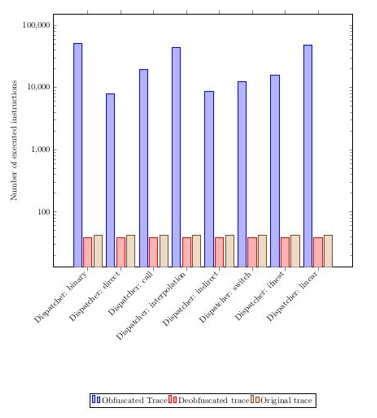 We also confronted our approach to the Tigress challenges. The challenge consists of 35 virtual machines with different levels of obfuscation (see following table). All challenges are identical: there is a virtualized hash function f(x) -> x' where x is an integer and the goal is to recover, as close as possible, the original hash algorithm (all algorithms are custom). According to their challenge status, only challenge 0000 had been previously solved and October 28th, 2016 we published a solution for challenges 0000 to 0004 with a presentation at SSTIC 2017 (each challenge contains 5 binaries, resulting in 25 virtual machine codes). We do not analyze jitted binaries (0005 and 0006) as jit is not currently supported by our implementation.

We have been able to automatically solve all the aforementioned open challenges in a correct, precise and efficient way, demonstrating that the good results observed in our controlled experiments extend to the uncontrolled case. Correction has been checked with random testing and manual inspection. The hardest challenge family is 0004 with two levels of virtualization. For instance, challenge 0004-3 contains 140 millions of instructions, reduced to 320 in 2 hours (see following tables).

One of our main limit is that our approach is geared at programs with a small number of tainted paths, which is not a problem for hash algorithms but may be a strong limit for others virtualized programs like malware. Then our DSE model (which is Triton) does not support user-dependent memory access. Then multithreading, floating point arithmetic and system calls are out of scope of our symbolic reasoning. Also, as our approach is based on a dynamic analysis, loops and recursive calls are unrolled which may increase considerably the size of the devirtualized code.

Potential defenses could be to attack our steps like killing the taint or spreading it as much as possible to influence our preciseness. It also could be possible to kill our dynamic symbolic exploration adding some hash conditions relying on tainted data (VM's inputs), as explained in a previous blogpost. Example: if (hash(tainted_x) == 0x123456789) where hash() is a cryptographic hash algorithm. If we cannot explore the whole program behavior, it will result in an incorrect devirtualized version of the program.