At Quarkslab, we like to play with Android devices. So the release day of the Samsung Galaxy S5 we gave a look at the firmware to search for issues. We quickly spotted a simple vulnerability and had a working exploit. The vulnerable application is UniversalMDMApplication, its goal is to make the user enrollment easier for the enterprises. This application is present by default in the Samsung Galaxy S5 ROM (and many others) and is part of the Samsung KNOX security solution for enterprise.

When launched with special attributes, we can fool the vulnerable application in thinking that an update is available. The result is a popup showed by the vulnerable application asking the user if he wants to update or not. If the user chooses "yes", an arbitrary application is installed, if not we can relaunch the popup making the user thinks the "cancel" button is not working... Our vulnerability can be triggered via a mail (by clicking on a crafted link) or by browsing a malicious page in Chrome/stock browser. The vulnerability can also be triggered when the attacker is in position of MITM (Man In The Middle) as we can inject arbitrary JavaScript code inside HTML page accessed over HTTP.

We kept this vulnerability undisclosed because we thought this could be a good one for the mobile pwn2own but the rules are stricter this year, maybe too strict (they removed the USB category because it means user interaction... come on guys...). With the new rules, the victim is only authorized to click one time, to open the malicious content and nothing else. So when the popup appears, even if most of the user will click on "yes", for the pwn2own guys it is already an invalid vulnerability.

Even without the problem of "user interaction", this vulnerability has been patched in August on the Samsung Note 4 and Alpha but not until October for the Samsung Galaxy S5, thus can not be used anymore for the pwn2own.

Timeline:
To our knowledge the following models are still vulnerable:

Warning: This list is not exhaustive and others models can also be vulnerable.

UPDATE: A way to patch the vulnerability is provided at the end of the article.

The UniversalMDMClient application is installed by default as part of Samsung KNOX. It registers a custom URI "smdm://". When an user clicks on a link to open an URL starting by "smdm://", the component LaunchActivity of UniversalMDMClient will be started and will parse the URL. Many information is extracted from the URL, and among them an update server URL.

After having extracted the update server URL, the application will try to do a HEAD on the URL. It will check if the server returns the non standard header "x-amz-meta-apk-version". If this happens, it will compare the current version of the UniversalMDMClient application to the version specified in the "x-amz-meta-apk-version" header. If the version in the header is more recent, it will show a popup to the user explaining that an update is available and asking if he wants to install it or no. 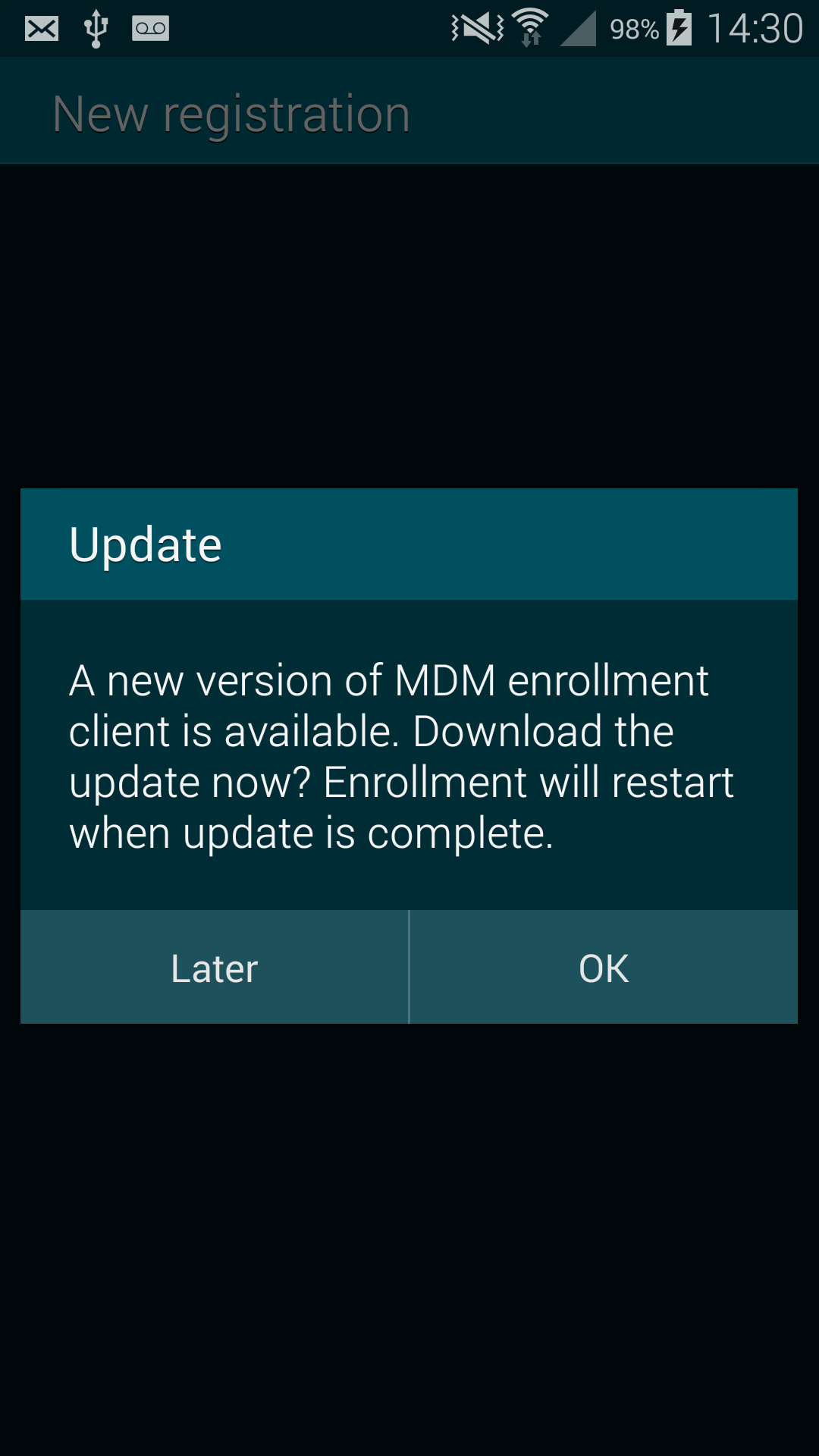 Looking at the UniversalMDMClient's AndroidManifest.xml file, we can see that it defines a custom URI:

The intent-filter registers (line 11-16) the custom URI "smdm://" and associates it to the com.sec.enterprise.knox.cloudmdm.smdms.ui.LaunchActivity component. When the user (or his browser ;) ) will try to open a "smdm://" URI, the onCreate() method of LaunchActivity will handle the situation. From here, we will dive into the code. Besides the application has been ""obfuscated"" by proguard, it is not really a problem to analyse it using the JEB decompiler and his ability to let the user rename methods and classes.

Below is the source code decompiled and renamed of the onCreate() method:

The first thing done by the onCreate() method is to check (via the function getPreETAG()) the presence of a file named PreETag.xml inside the directory /data/data/com.sec.enterprise.knox.cloudmdm.smdms/shared_prefs/. If the file exists, the application aborts its execution by calling the finish() method. By default, the file PreETag.xml does not exit.

The application will now try to get the Intent used to start the Activity and more precisely the data attached to it. The data must be of the form "smdm://hostname?var1=value1&var2=value2". The parsed variables names can be easily obtained from the source: seg_url, update_url, email, mdm_token, program and quickstart_url. The most important is update_url. After writing all these variables values inside a shared_preference file, onCreate() ends by calling Core.startSelfUpdateCheck():

The function verifies that data connection is available, deletes pending update if present, constructs an URL based on the value of the umc_cdn string inside the shared_pref file "m.xml" and append to it the constant string "/latest". The value of umc_cdn is the value of our Intent data variable udpdate_url. So this is a value fully controlled by an attacker. It then calls UMCSelfUpdateManager.doUpdateCheck() with as first parameter the previously constructed URL: 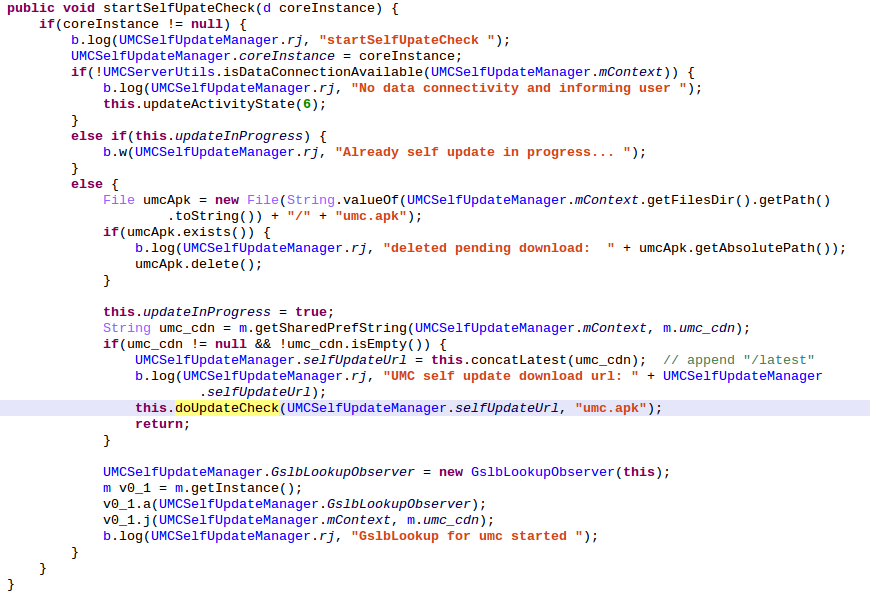 Inside this function, a ContentTransferManager class instance is initialized and a HEAD HTTP request is performed on the attacker controlled URL. The different states which will be encountered during the life of the HTTP request are handled by the handleRequestResult class and methods onFailure(), onProgress(), onStart(), onSucess(), etc.

At this point a popup appears on the screen of the user, explaining that an update for his application is available and asking if he wants to install it or no. If he chooses yes, we can continue our analysis, and the attack.

If the user chooses "yes", UMCSelfUpdateManager.onSuccess() is called, and before returning, it calls his parent onSucess() method which has the following code:

This onSuccess() will finaly call beginUpdateProcess() which will start an update thread: 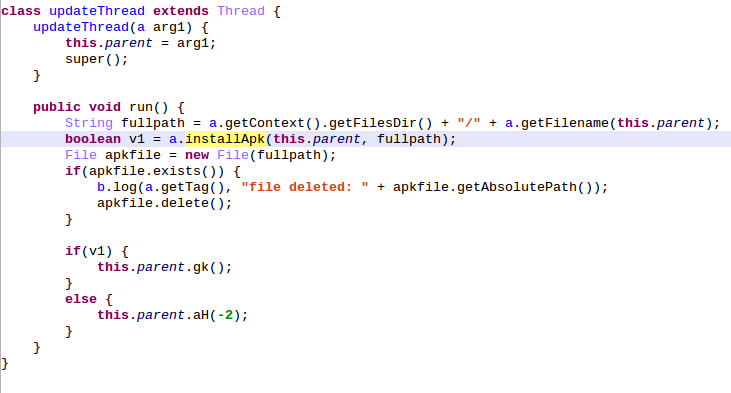 The update thread will call installApk() which in turn will call _installApplication() whose role is to disable the package verifier (to prevent Google from scanning the APK at the installation), install the APK and reenable the packager verifier: 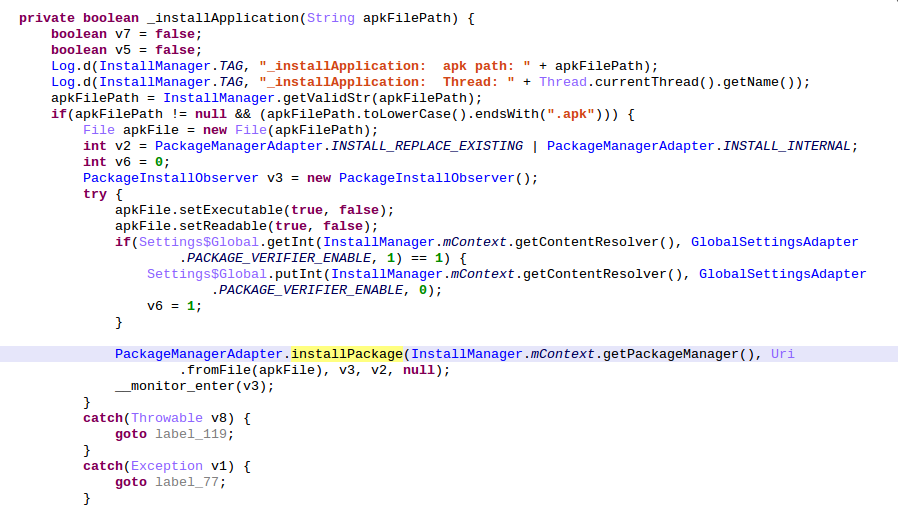 And... that's all. At no time the download APK authenticity is checked nor the asked permissions are showed to the user. Hence, this vulnerability allows an attacker to install an arbitrary application.

Once the update have been installed, it is not possible to exploit the vulnerability anymore because when a successful update has been installed, the value of the ETag header is written in /data/data/com.sec.enterprise.knox.cloudmdm.smdms/shared_prefs/PreETag.xml, and the existence of the file is the first check done inside the onCreate() method of LaunchActivity. If the file already exists, the method calls finish() and the execution aborts.

The patch by Samsung

Below is the function performing the check:

The following popup appears on a patched system: 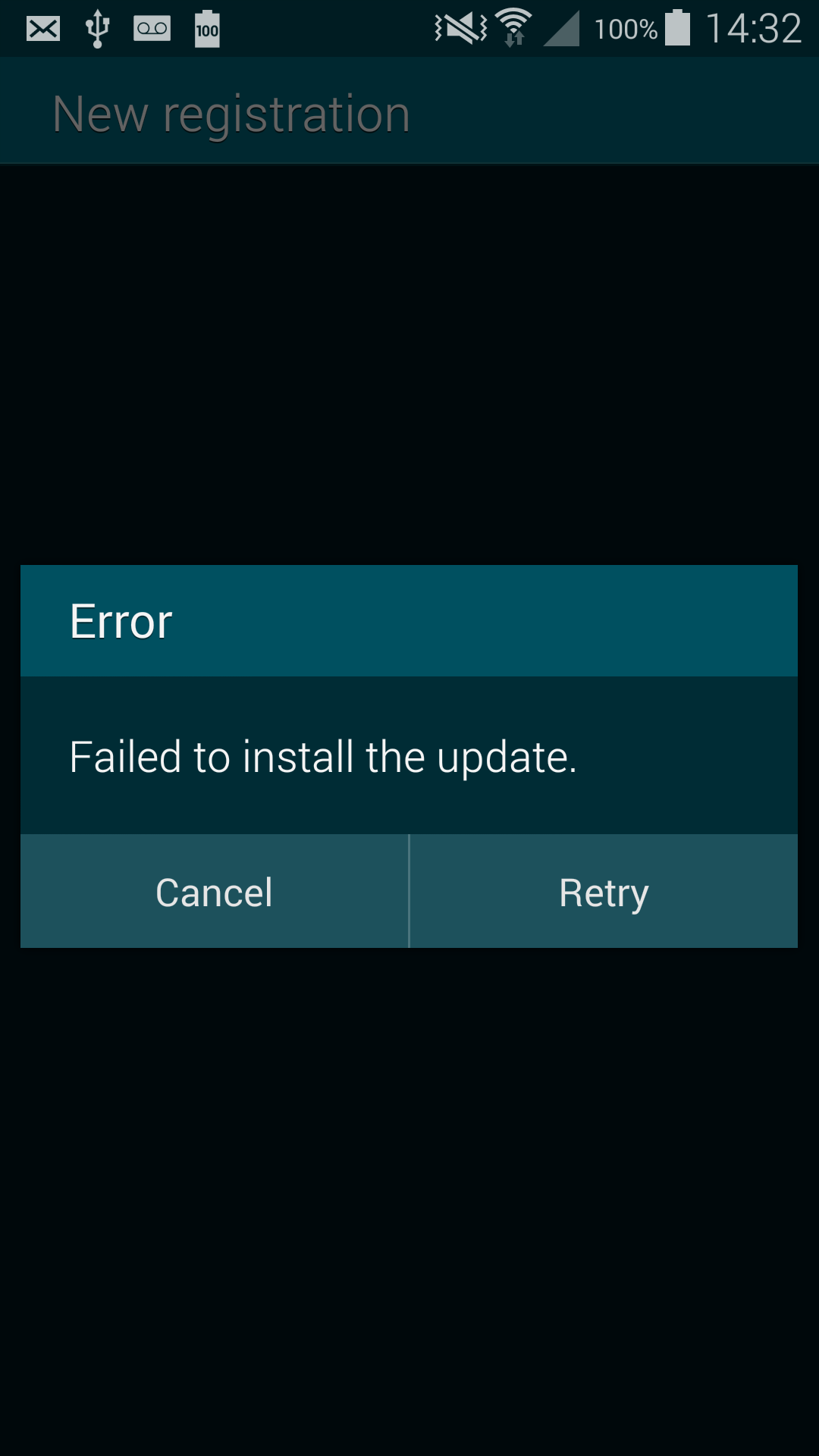 The exploit is pretty simple, you have to make your victim run your custom URI by making him click on it in a mail or by redirecting to it in JavaScript in a web page :

The interesting fact about triggering the exploit via JavaScript code inside a web page, is that if the user choose "cancel" and deny the update, Android will give focus back to our web page and resume the execution of our JavaScript code. This mean we can do a loop inside the JavaScript code that will trigger the vulnerability. This is so quick that a lambda user will think that the "cancel" button of the popup is not working correctly. If the user choose "yes", it will install the arbitrary APK and prevent further running of the application.

For the server part you have to return the following headers:

Here is the code of server part:

Below is a video showing the exploit on a patched and unpatched version of the Samsung Galaxy S5 :

How to patch it yourself ?

If your device is vulnerable, you can wait for Samsung to patch it or you can patch it by yoursel. To patch your device, no root access is required, you only have to click on this link :

In fact, by clicking on the link, the vulnerable application will be launched but without a specified update URL it will use by default the Samsung UMC (Universal MDM Client) server http://umc-cdn.secb2b.com:80. This server hosts the last version of the UniversalMDMClient.apk available and installed on the patched models (Samsung Galaxy S5, Note 4 and Alpha). Because this version is more recent than the vulnerable one, the application will download and install it, you are safe now.

After the installation you may have an interface asking for you enterprise credentials in order to enrolls you, you shoud press "back" or "home": 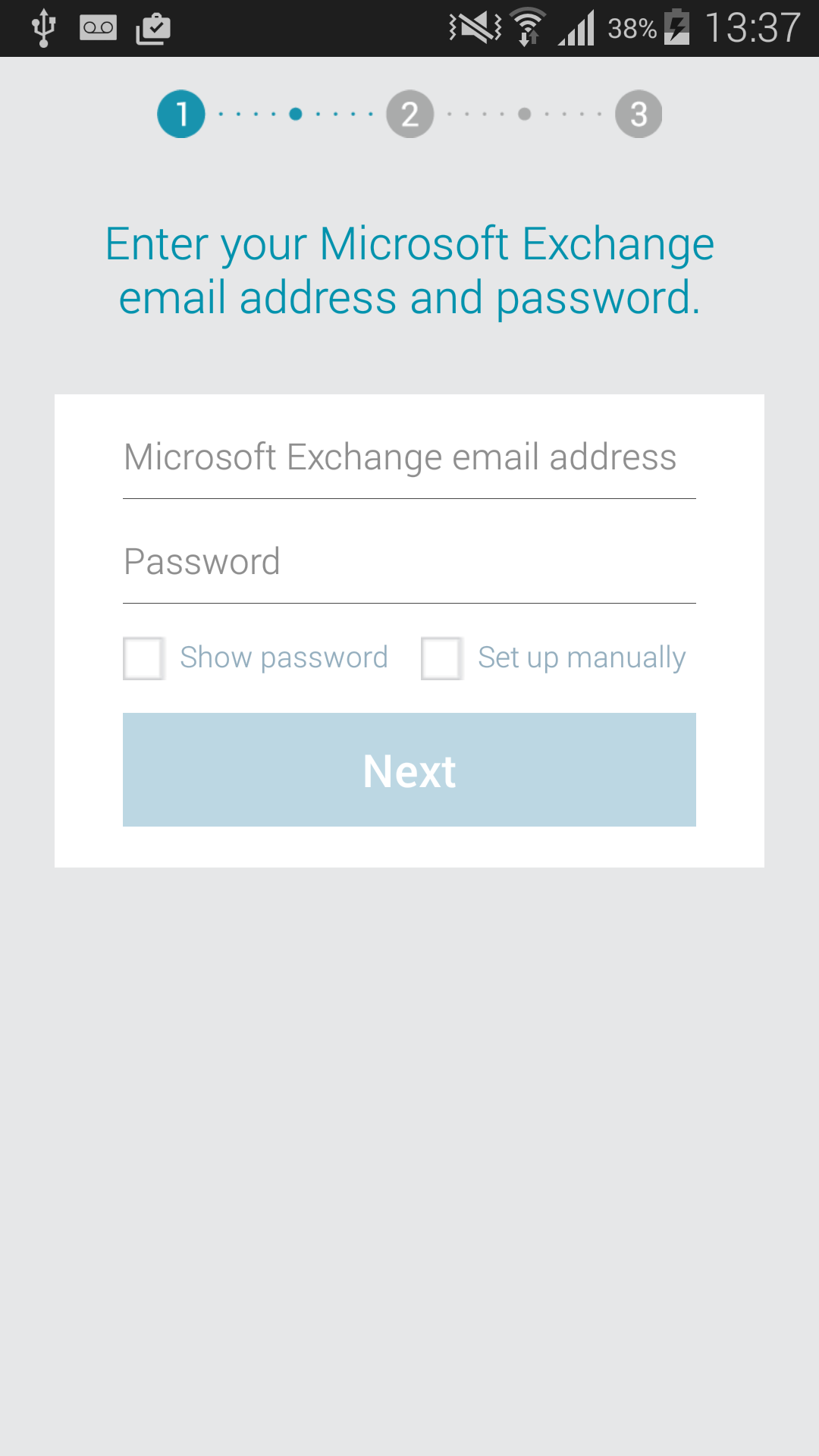 This vulnerability proves that yet in 2014, easy to spot and exploit vulnerabilities are always present in high end android phones even if they are approved by the NSA for government use [4] (or maybe it is the reason why ;)